Here are two fun facets of history for you to ponder regarding our civil parish boundary before considering our church history in more depth below. Firstly, Commander Wylie (who designed the arms of Canberra in Australia) wrote to the rector of Alfold in 1933, 'I have discovered that in your parish there lived many hundreds of years ago the original founder of the Sydney family... John de Sydenie... The great family of the Sydneys was named after him, and from them the city of Sydney derived its title.' So firstly, we're an internationally connected parish! Secondly, we've had a problem with smugglers - Dame Tickner of Rosemary Lane (born in 1764) recounted her early days, 'When in bed she would hear them [the smugglers] splashing down the lane on their powerful horses laden with spirit kegs. They turned up Mary Magdalene Lane, now a disused grass track. The smugglers' kegs were hidden in farm houses in Sydney Wood, where recesses in the great chimneys received them. If a farmer allowed the smuggled goods to be hidden in his farm he would always find a present of spirits left behind for him.' To the best of our knowledge, no such activity takes place in our parish today! Both quotes above were taken from  F W Cobb's great little book 'Alfold - the story of a Surrey Village.'

As a parish we straddle two counties (West Sussex and Surrey), and historically, before becoming a United Benefice in the late 1970's the then two separate parishes were in different dioceses! However, upon becoming a United Benefice both parishes became part of Guildford Diocese, where we happily remain today. In more recent times we have very excitedly become one parish, and therefore we see ourselves as one church family meeting in our two great church buildings on alternate weeks. This was a big, prayerful decision, but we, as a church, felt that we would meet the needs of our wider community more effectively working together than we were apart. It's been fun, and both historic parishes have been able to enjoy one another's beautiful church buildings. Let me tell you a bit about them now, we'll start with the youngest first: 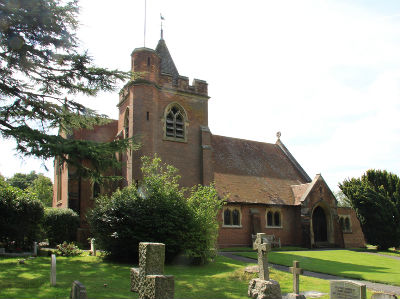 This church building was built at the turn of the 20th century on the outskirts of the village to replace a 15th century chapel in the centre of the village. It's built of local red brick and can hold approximately 120 people (although that can be stretch somewhat!) As well as fixed pine pews fitted at the time of its building, the church contains eight 14th century oak pews from the old chapel. These are believed to have been made using only the axe and the adze (i.e. without a saw or plane!) 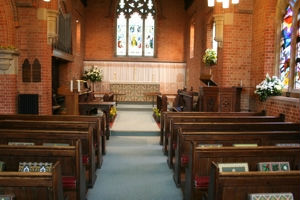 Modern stained glass windows designed by Penelope Neave and given by Elspeth Riley-Smith of Brewhurst in memory of her parents and husband, add a feeling of welcome, light and warmth. The design of the reredos curtain includes a peacock (for Paradise), doves (for peace), the Paschal Lamb and cross, which is the sign of St John the Baptist, the Sussex Coat of Arms, and an L for Loxwood. The electronic organ was installed in 2005 and a new oil fired boiler in 2011. 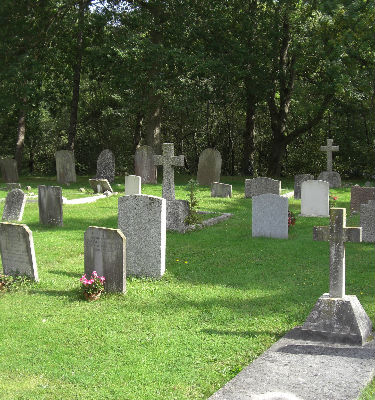 The church has excellent acoustics and is equipped with a sound system with a relay to the 'Loxwood Church Room', which,  adjoining the church, was built in 1985. The Church Room creates a space for creche, children's groups, refreshments for after church services, and for many other non-church activities. The room has a small kitchen and an accessible WC.

The churchyard is open for burials and is being actively managed to maintain its rural nature and includes the addition of a Garden of Remembrance in 1999. 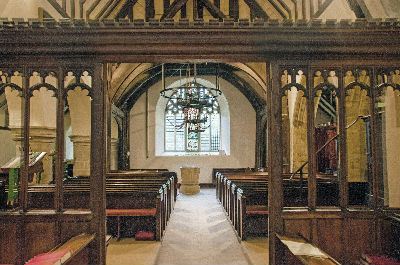 The construction of the first Norman church, consisting of nave and chancel, took place in approximately 1100. Our beautiful font dates back to around this time, probably about 1080, and is one of the finest and best preserved in Surrey. It is marked with a Maltese Cross on a long stem, defining it as unmistakably Norman.

The south aisle of the church was added in 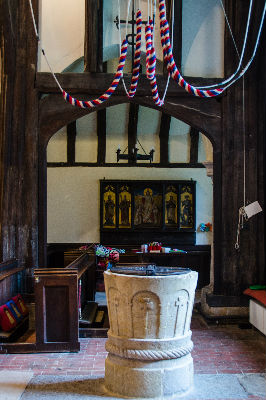 1200 by the piercing of the walls and the
insertion of the rounded Norman pillars.
The north aisle was then originally added
about 1280.

The outline of the east window dates back to 1320, although the glasswork, imported from Normandy was constructed in 1850.

The pews are mostly of 14th and 15th century origin. The rood screen is 19th century, but it probably incorporates wood from the 15th century screen, which can still be found supporting one of the ancient
churchyard yew trees believed to be over 2000 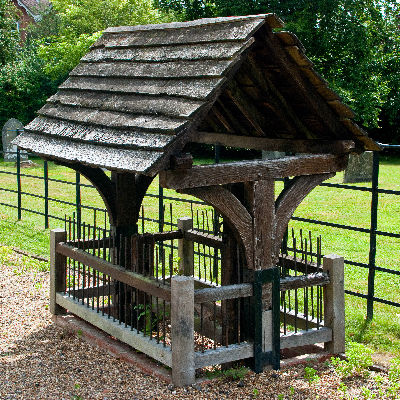 Outside the church stand the village stocks, one of only two complete sets of stocks in Surrey. Any boy who dared laugh in church was confined in these stocks, given a thrashing, and left to meditate on his sins until the next service of the day. As the current vicar, I'd like to say that we still practise this same discipline, but alas we do not - some of our All Age services now would've caused quite an uproar back then!

From the outside the timber bell-tower is also noticeable, standing on large oak posts
worked into a series of hollow mouldings. 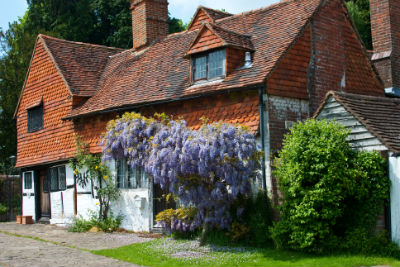 The framework of the bell-chamber and spire is an elegant display of mediaeval carpentry dating from around 1500. Watching the bell ringers 'in church' at the western end of the nave provides quite a unique atmosphere.

Within the ancient graveyard there are grave markers dating from 1658. Although this graveyard is now closed for further
burials, a more recent 'open' cemetery can
be found just a short walk down Rosemary Lane. 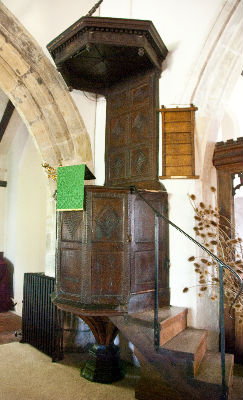 Opposite the church can be found 'Alfold Church Room', the middle of a beautiful row of terracotta tiled terrace cottages. The Alfold Church Room houses our church office, choir vestry and church hall, which is used for children's groups, and can be hired out for non-church activities.

It's also worth mentioning our beautiful Jacobean pulpit and sounding box. Merely looking at it one gets a sense of pride in its workmanship and carving.

If visiting St Nicholas church building please do take one of our little booklets 'A History of Alfold Church', where you'll find a much more detailed history of the church.